CrossFit is evolving.  The changes are subtle, but the impacts down the road, if it continues, will be very good for the sport and everyone who does CrossFit.  There was CrossFit but now it’s the new CrossFit, and like it or not, it’s here to stay.

CrossFit as a brand, began as many people envision it, literally, in people’s basements and garages.  In 2000, CrossFit Inc. was founded, and by 2005 there were 13 affiliates across the US.  The impressive results it’s participants obtained, compared to the results of the typical gym-goer, led to a huge explosion which has pushed the number of CrossFit affiliated gyms, called “boxes”, to over 13,000 worldwide — more than even Starbucks if you can imagine!

CrossFit defines itself in many ways, but in terms of it’s programming, the definition of CrossFit is “Constantly varied, functional movements, performed at high intensities across broad time and modal domains”.  Essentially this means the workouts are always changing, and this means people are never bored with the WODs (workouts… WOD = Workout Of the Day).  Functional movements are movements that involve using a relatively high amount of muscle mass to complete them, so the energy demands are high, and they simulate many day-to-day activities that are otherwise fatiguing.

Examples include squatting, deadlifting, cleans, snatches, rope climb, muscle-ups and for example, with squatting, it can be done in many different ways (front squats, back squats, overhead squats, etc…) with many different types of loads (barbells, dumbbells, kettlebells, sandbags, worms … yep.. you heard me right… worms… (see image below).

Performing movements at relatively high intensities creates a high levels of fatigue which the body must adapt to and become good at managing.  And finally across broad time and modal domains, essentially means that the workouts can be short and super intense, or much longer with more of an endurance type of effect, or anywhere in between, and with any sort of variable intervals using different exercises or training tools.

With every new trend, though I’d hardly call it a new trend, now 18 years since it’s inception, there will always be people who like to rain on other people’s parades.  So there were the critics about how CrossFit participants get injured more than people who do other types of strength training and conditioning workouts.

In the end, each individual is responsible for making the decision as to whether they will or will not follow the advice of their coaches, or to listen to their body.  CrossFit Inc., cannot police what goes on inside each CrossFit box, however, as a business, if you’re injuring your members, you won’t have a business for too long.  This doesn’t mean there aren’t some horror shows, but this is the case in any industry, or type of business.  Heck, there are horrow show neighbours, police, grocery bag packers, you name it.  And apart from the members of any given CrossFit gym, the general public doesn’t really know what’s going on inside these CrossFit gyms.  But what they do see are the videos online, the CrossFit fail videos, the competitions where people are pushing themselves to the limits, and the various message boards where people like to troll CrossFitters and CrossFit gyms because of their biases against them.

The media has had a bit of a field day with CrossFit because of this, and CrossFit HQ has taken note.  There have been some changes in the past few years that are slowly encouraging improved technical performance at the highest levels of competition.  Which means, the emphasis is not just about how fast and how heavy can you go, but how well can you do the movements.

A perfect example of this is this year’s modifications to the Handstand Pushup movement standards for the Open.   A new way of measuring (adding the athlete’s height to half the length of the distance from the elbow to the end of the closed fist) the height the feet (heels) must rise above means a very full and complete flexion of the shoulder must occur.  By adding this new modification, athletes have to be focusing on getting the most length out of their body.  It means controling their descent a little more.  It means going a little slower and more deliberately.  And for many, after they complete 18.4, and don’t get the scores they were hoping for, the decision to finally address their tight shoulders and work to finally get a full range of shoulder flexion will be something they willfully accept. 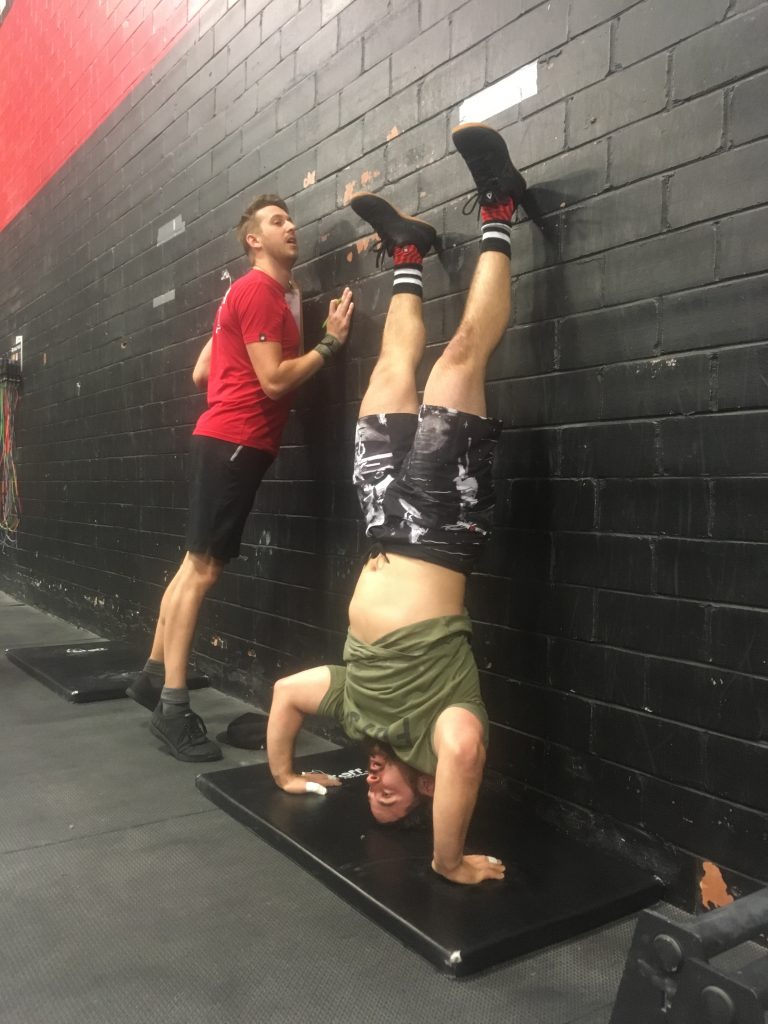 We frequently we see folks who do not achieve a fully flexed shoulder in the overhead position, and until now if they were strong and well conditioned, they could just rip through their HSPU’s just making sure they fully extended their elbows and got their feet over a relatively easy target.  The new higher targets will force many who were banging out high reps to do many fewer per set and in some case singles to avoid missing the line.  And those who miss the line and get no-repped frequently enough will find their scores suffering enough that they will finally decide to commit to the shoulder mobility work.

For the Hanstand Pushup, it means less dropping down hard on the top of your head.  This means less cervical disc compressions.  This is just one example of a number of new movement and/or equipment standards that in the end will be good for CrossFit, it’s participants, and anyone involved in CrossFit in any way.

Like I said at the beginning, it’s a subtle change, but it paves the way for more down the road.  There is much more that should change to make it better for everyone, but it’s a large beast and change takes time.

This is the New CrossFit… and Like It Or Not… It’s Here To Stay!